Glorax Racing has added Isaac Tutumlu, Gabriele Lancieri and Dimitri Deverikos to its lineup, which already had Andrey Birzhin Alexandrovich and Rino Mastronardi confirmed. Deverikos is the 2005 British GT GT3 champion, while 39-year-old Lancieri competed in the Italian GT championship in recent years.

After spending 2014 away from the race tracks due to business commitments, Dimitris Deverikos had a plan for starting the 2015 season with a bang! Having already claimed two highly prestigious national GT titles (British in 2005 and Spanish Iber in 2013) there was still one major landmark missing from his long racing CV: participation in a major 24 hours race. Therefore when the opportunity presented to join his team mate from the successful 2013 Spanish Iber & Euro GT Open campaign Isaac Tutumlu for the Dubai 24 hours in the newly formed Glorax Racing team he literally jumped at it. Joining them in the Ferrari 458 Italia GT3, that was spotting the colors of Radisson Blu Park Hotel Athens, were experienced Italian racers Gabriele Lancieri, Rino Mastronardi as well as team owner Andrey Birzhin Alexandrovich. The crew, under the technical management of fellow Greek Giannoulis Kafetzis, started well on Wednesday’s open test by posting the 8th fastest time out of 24 entrants in the strongly contested A6 (i.e. GT3) class.
Dimitris equaled this achievement on Thursday’s final free practice session, a great performance given that this was his first experience of the daunting 5390 meters race track. Things were looking well for the Glorax Racing team as they entered qualifying and indeed their strong level was evident on the first half of the session where Alexandrovich posted the 6th fastest time! For the second and final half of the session it was Tutumlu’s turn to take the wheel and indeed the Spaniard improved as he was fighting hard for a place in the top 10. Unfortunately, it was then that disaster struck: braking hard from 240 kph Tutumlu found oil that the marshals failed to warn about. A big crash was unavoidable and unfortunately another two cars joined in sympathy creating a very expensive crash scene. The damage on the Ferrari was substantial and crucially impossible to fix until the race’s start leaving the team no option but to retire their entry.
The 24 hours dream of Dimitris may have to wait a little longer to be fulfilled, however with the continued support of Radisson Blu Park Hotel Athens, he has an exciting season to look forward and move on with his next racing challenge! 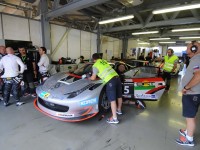 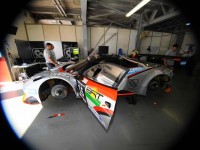 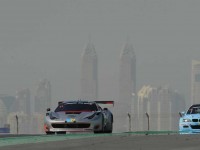 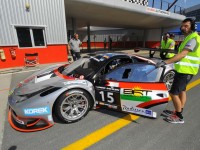 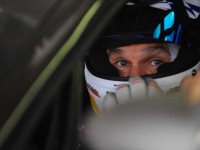 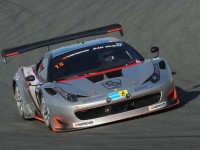