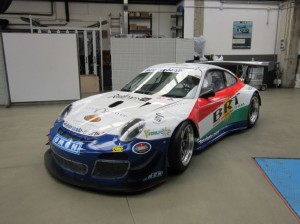 Hard and important months have spent in meeting and discussion have not interrupted the original plan of the team in the International Open GT with a Porsche GT3 R evo 2013.

The only Porsche GT3 R in Gts will be showed on Paul Ricard starting grid on April 26/28 with Isaac Tutumlu (Kudi-Spanish nationality) and Dimitris Deverikos (Greek), drivers that will drive a un-discussible car, they will have to afford 16th competitors (11 Ferraris, 2 Mclaren, 1 Mosler, 1 Aston Martin and 1 Mercedes).

Orlando Redolfi (team manager, owner and founder of Autorlando Sport) remains the only one in Gts to defend Porsche brand , and he is proud to compete in this important project, sure to have competitively from drivers and car in his side.

The driver Isaac Tutumlu says: “ I am very happy to be racing with such a competitive and winning team as Autorlando, they have been working as Porsche Official team and nowadays they still have the support from the Brand of Weissach, that means we will have for sure competivie material. Regarding my team mate, I have nevere raced with him but I have seen his CV and it he did some good positions in the past at the GT Open and FIA GT as well, so I am sure he will also help a lot the team to achieve the objectives. The GT Open has every time more media impact and many professional drivers coming from GP2 and F1 are joining the championship, what means it will not be easy to fight against them, but as usual my goal is to win the championship in the GTS Class.”

The races will be in live streaming and on RAI SPORT and Primo Canale on Saturday at 16.00 and Sunday at 12.20. Enjoy the show!